Continuum is dedicated to partnering with clients to assess current culture dynamics and provide custom tools and strategies to re-engage your work force.

Gallop defines engaged employees as “those who are involved in, enthusiastic about, and committed to their work and workplace.” The 2014 Gallup Poll revealed that fewer than one-third of U.S workers were engaged in their jobs. Even more concerning data showed that 51% of employees were NOT engaged and a further 17.5% were actively disengaged. Culture and Engagement were combined and rated the #1 concern of leadership overall in Deloitte’s “Global Human Capital Trends 2015 ‘Leading in the new world of work'” study.

Although Employee Engagement has risen to top priority, few organizations deeply understand or are equipped to address the issue. There is not a one-size-fits-all solution. No quick fix will succeed. But culture can change, and the rewards are an inspired, creative, unstoppably alive workforce.

Continuum Consulting is dedicated to partnering with clients to assess current culture dynamics and provide custom tools and strategies to help you improve. Assessment tools we may initiate include:

Solutions are diverse and rich – customized for your environment based on key data analysis and in collaboration with leader input.

Challenge: Every year the leadership team of a major pharmaceutical company received feedback from an annual organization employee engagement survey. They immediately put into place solutions and initiatives they thought would address issues surfaced by employee feedback. When the people were surveyed again, there was no improvement in the scores, even after a tremendous amount of time, effort and resources were expended. They called on Continuum to analyze the situation and explore strategies for improvement.

Continuum Solution: Continuum partnered with a cross-functional internal leadership team to explore the dynamics and options for change. We discovered that when prior survey results were delivered, the leadership team themselves interpreted the data and designed and implemented their own solutions. Frontline staff were never asked to help clarify feedback, to offer solution options, or engage in change efforts directly. In other words, the “employee engagement fix” never engaged the employees themselves. Also, there were no processes created to assess whether the efforts were actually addressing needs or making a difference in real time.

Continuum consultants designed an engagement campaign kicked off by a series of focus groups to engage people three to four levels down in the organization. In order to gain understanding and solicit direct staff recommendations, we facilitated 10 feedback groups, each of which included a welcome from the site head, education about current initiatives, request for feedback, and specific questions or issues where leaders especially requested feedback.

The groups then collaborated, working to assimilate all feedback from the individual sessions and crafting a series of recommendations for the senior leadership team. Continuum coached focus group members in design and presentation of the material to be of maximum benefit for the SLT, who met directly with the group representatives to receive feedback during a facilitated retreat. The strategic retreat included small group discussions where leaders and frontline staff were able to openly discuss challenges and options.

Outcome: The discussions were so successful that focus group representatives were asked to form a leadership advisory group, tasked with meeting monthly with a representative from leadership to ensure that recommendations were acted upon, and to craft an ongoing assessment and feedback process. We turned the focus group process into a leadership development program.

Results from the next Pulse Survey indicated an increase in all key indicators. The company decided to institute the process into a yearly program with a focus on employee input and recommendations to drive the annual goals process.

Challenge: Continuum was asked to redesign a global employee engagement survey and action planning process for an international NGO which was experiencing highly varied levels of engagement and feedback participation using old methods. Goals of the initiative included:

Continuum Solution: As usual, we began with the end in mind. If we wanted managers to use the feedback (unlike the former shelf-sitting manuals), and for people to show accountability to understand the data and engage in active improvements, we needed to discover what managers really needed. What information would be important to them? 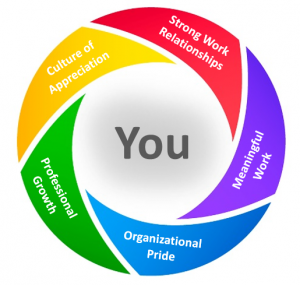 We conducted a series of meetings with the organization’s global leaders to elicit feedback on key issues, areas of specific need, gaps in information for which they needed greater employee feedback and engagement. From this level of feedback, Continuum consultants created an Employee Engagement Model highlighting targeted aspects of inquiry. The model became the foundation for organizing the survey and designing the communication campaign.

The initiative continued with Continuum taking point or assisting engagement teams in:

Outcome: Six months after the Action Plans were submitted to the Senior Leadership Team, we gathered stories about the changes and improvements from teams around the world. These stories were shared across the organization as part of the lead up to the upcoming Pulse Survey which was planned to assess impact.